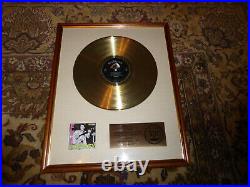 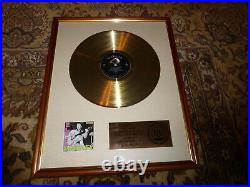 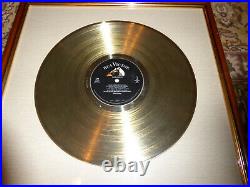 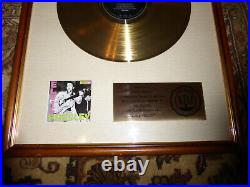 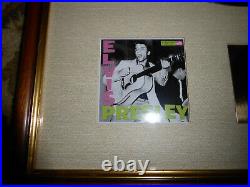 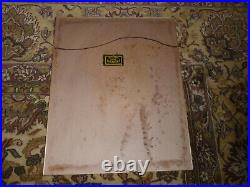 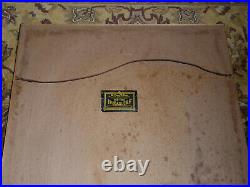 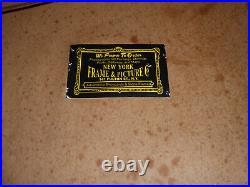 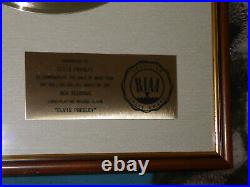 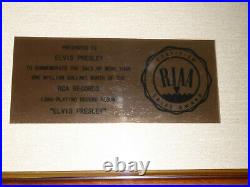 This is a super rare and COOL item!!! The award is for the Elvis Presley Album which was Elvis' first album release by RCA records!! It appears to be made as a presentation award.

It is not exactly clear when it was made. If the award is manufactured closer to the time when the award was first issued, the value increases significantly.

There are some characteristics of the award that may give an indication of when it was made. After 1974 RIAA Gold L.

The Elvis Presley Album was released on March 23, 1956!! The album achieved Gold status from the RIAA on November 1, 1966. Or, there could have been a delay in submitting the required paperwork to get the gold certification. Besides containing the song Blue Suede Shoes, the album also had many of Elvis' best early recordings The listed presentation of the award is to Elvis Presley!! It is more likely this was presented to the record label or some employee of the record label, and the Elvis Presley listed presentation on the award was requested at the time.

The award could have been displayed in recording studios, record label offices, artist manager's offices, or in some cases the artist's homes. This appears to be an early RIAA award and far fewer of these were issued than RIAA awards issued later!! Estimates for this time frame are only 5-25 plaques awarded! The award also appears to have an unopened original back with the correct New York Picture And Framing Co. " sticker on the back with the correct street address, "141 Fulton St.

, (the framing company was at this address until sometime in 1969). In 1969 the New York Picture and Framing company moved to 29 John St. An unopened back, (which this appears to be), where the award has not been re-backed would also be much more desirable!!

This information would point to it possibly being from the correct time period of when the award was first issued making it a first or second generation award. The award has the original Bainbridge textured off white matte which was in use on RIAA awards until sometime in 1967!! Sometime during 1967 they switched to using a whiter Miller matte board. The gold metal disc with the correct RCA label, the presentation plate and miniature record album all appear correct for the time period when this RIAA award would have been released!! The metal disc, (record) appears to have been cut into the matte, and the album miniature, and the award plaque have been matted in.

This is also correct for the earlier time period. On later RIAA awards the album miniature was set on top of the matte. Overall the condition of the frame, gold record, and contents appear to be in very good to excellent condition. There are a few scratches and marks on the frame, with minor fading of the album art, and slight yellowing and aging of the matte.

The cardboard back shows aging, discoloration and staining, and some rust on the hanger hardware. There are some variances in the frame materials and colors used on the early awards. This could be due to a special order, or different materials being available at the time of production. The fonts and methods of applying the information on the plaque from these early awards could also vary.

The lettering could be silk screened, acid etched, or engraved. The frame on this RIAA award is slightly different, but in a style similar to the other RIAA awards from the time period!! On many of these early RIAA Gold awards the actual artist's record was not used. Often, the gold disc (record) actually used for the award could be from any artist from the time period.

On many of the early RIAA awards the number of songs on the gold record does not match the number of listed songs on the printed label when you compare them. Even if the number of songs listed on the label matches the number of songs cut into the record, it still doesn't mean it is the actual copy of the artist's record. Since the artist's record label was affixed to the gold record award it really didn't matter in the early years if it was the actual awarded artist's record. The framed dimensions of the award are 17.25" X 21.75", (correct size for the period). The presentation to Elvis Presley, is THE most desirable and makes this one of the RAREST RIAA awards you will ever find!! Everything about this RIAA award makes it almost unique! I have described the item as completely as I can. I have included some research as well.

Please do your own research before purchasing. If you have any questions please ask.

By purchasing this item you agree to the terms I have outlined above. And an RIAA Gold Record award for The Beatles Second Album awarded to listed artist Ringo Starr! The item "RIAA Gold Award Elvis Presley (His First Album) Awarded To Elvis Presley" is in sale since Tuesday, October 15, 2019. This item is in the category "Music\Records". The seller is "jcrhf8pde" and is located in Houston, Texas.

This item can't be shipped, the buyer must pick up the item.