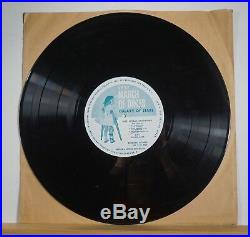 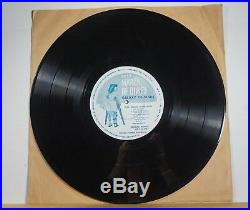 Here's the hard-to-find 16 radio transcription version of the 1957 March of Dimes Galaxy of Stars album (GM-8M-0658) featuring an interview with Elvis Presley. It was only issued to radio stations, to be played between January 2nd and 31st, after which it was supposed to be destroyed - the label reads please destroy transcription after campaign.

" Some stations must have complied with the destruction requirement, while other copies were no doubt lost over the years - these 16" discs are thin and fragile - making this one of the scarcer records from Elvis's early years. It was originally issued with a matching disc containing music by the artists featured on the interview disc (and others), but this is not present. The other artists interviewed are Jill Corey, Andy Williams, Alan Dale, the Mills Brothers, and Guy Mitchell. It comes in the original plain brown paper sleeve.

We don't have the correct equipment to play a 16 record, so our conservative VG grade is visual only. The vinyl has various small scuffs but appears to have been stored well in the sleeve for all these years. The item "Elvis Presley Radio Interview 1957 March of Dimes 16 Transcription Disc Record" is in sale since Monday, January 14, 2019. This item is in the category "Music\Records". The seller is "mturchi" and is located in Tucson, Arizona.

This item can be shipped to United States.