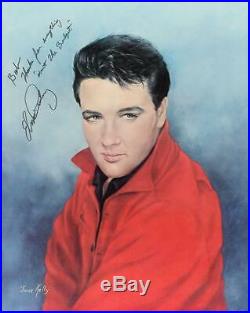 The television special was actually called Singer Presents.... Elvis inscribed Bob Thanks for everything about the budget Elvis Presley. Bob played a pivotal role in this Elvis Comeback Special: Presleys initial reaction to the special was negative. Was another scheme by Parker (colonel Tom) and was angered by the idea of singing Christmas carols on national television. His opinion started to change after he began talks with the specials producer Bob Finkel.

Able to persuade Singer, NBC and Colonel Tom Parker to alter the shows original concept. He obtained Parkers approval on agreeing to his terms that the show was to be centered on Elvis, while enough material for a soundtrack album and a Christmas single was to be recorded. Elviss enthusiasm for the project grew and he assured Finkel he. Was ready to perform new material, different than anything he previously done and he had no interest in Colonel Tom Parkers interest in the project.

On June the 26th there was an on-set birthday party for Colonel Tom Parker during break in the the rehearsals that were taking place for the special. The Colonel was given autographed portrait of Executive Producer Bob Finkel dressed as Napoleon. The portrait is still part of the Colonels collection in the Graceland Archives.

Part of that celebration included Elvis performing a parody to'It Hurts Me that pertained to the inflated budget of the special. And Bob Finkel the central figure of the song which went like this: It hurts me to see the budget climb to the sky. It hurts me the way that Finkel spends my dough. The whole town is talking theyre calling me a fool for listing to Binders same ol lies.

It hurts me when tears start to flow, they promised me sure if I would give in that I would-that I would never go wrong, but tell me the truth is it too much much to ask for one lousy tired ol Christmas song... The photograph is from the press conference for the Elvis'68 Comeback Special, Bob Finkel is to the right of Elvis, the photo. Does not come with the print. Daughter of producer and director Bob Finkel. My fathers career in Hollywood spanned 4 decades and he was involved. In such notable productions as the 1968 Elvis Comeback Special and the Muhammad Ali Variety Special.

Kelly print that was signed by and given to my father by Elvis. Presley after they had worked together on the 1968 Comeback. This beautiful June Kelly print was used to promote both Elvis's 1964 Roustabout and 1965s Girl Happy records and is in fine condition. This Elvis signed print comes with a full Letter of Authenticity from PSA and JSA.

When you have the chance to, take a look at the other items I have listed for sale, you might find something of interest. The item "Elvis Presley Print Signed To Producer Of His Legendary 68 Comeback Special PSA" is in sale since Wednesday, April 24, 2019. This item is in the category "Entertainment Memorabilia\Autographs-Original\Music\Rock & Pop\Records". The seller is "pinnacleartists" and is located in Staten Island, New York. This item can be shipped worldwide.