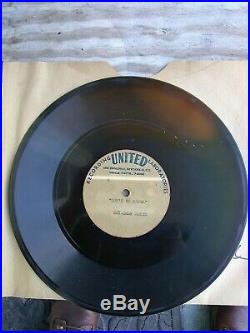 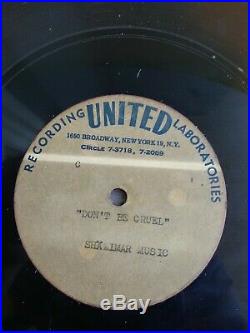 Thank you and good luck. I CAN SEND YOU A LINK SO YOU CAN HEAR THIS RECORD. December 25th 1955 Otis Blackwell went into the recording studios of Shalimar Music and recorded 5 songs. One of those songs was entitled "Dont Be Cruel". One of those records was "Don't be Cruel" that Blackwell.

When Elvis heard the song he picked it for the "B" side. That record that Elvis heard is in my hands. The Original or at least one of them. It is the only one known to exist at this time. It is not the same as Blackwells 1976 recording which can easily be found online.

I can get you a link to the recording I made of the record in my posession so you can compare it with Blackwells rendition in 1976. It has been certified 4 x platinum. It held the record for most sales for 36 years and according to polls "Don't Be Cruel" was Elvis's greatest hit. This record is the recording that Elvis listened to that started the ball rolling.

You will probably never get the chance to own this again. Otis Blackwell wrote "Don't Be Cruel, " "Return to Sender, " "All Shook Up and "Paralyzed, for Elvis Presley. He wrote Great Balls of Fire for Jerry Lee Lewis. He also wrote songs for Ray Charles, Otis Redding, James Brown, The Who, Billy Joel, James Taylor, Dolly Parton, Conway Twitty, The Judds, Carl Perkins, and Peggy Lee, among numerous others. The item "Dont Be Cruel 1955 original Otis Blackwell / Elvis Presley only copy known" is in sale since Saturday, November 9, 2019.

This item is in the category "Music\Records". The seller is "swtbutnaughty2" and is located in Port Orange, Florida. This item can be shipped to United States.