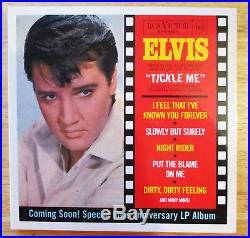 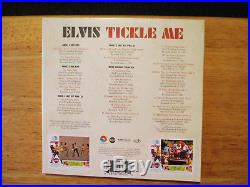 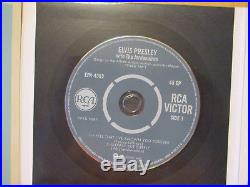 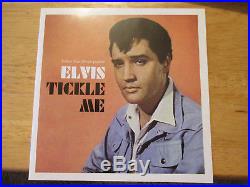 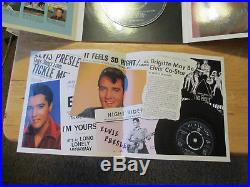 DELETED NEAR MINT 2005 FTD RELEASE. The twelfth FTD extended movie soundtrack, this time featuring the nine songs from Elvis' 1965 film'Tickle Me', plus 5 other songs also considered by Colonel Parker. All of these songs had been released previously on other Elvis LPs.

In 2002 Castle Records in England produced a very collectable vinyl LP including a booklet & photos and this FTD is a similar release. Tickle Me' - Filmed late 1964, released May 1965. Elvis' 18th movie was a formula slap-stick comedy packed with gorgeous girls and set on a health ranch. A one-off production for Allied Artists & it actually saved the company from bankruptcy. Kicking off with'Long, Lonely Highway' the soundtrack was an obvious improvement on the previous film Girl Happy.

That had only started showing in cinemas the previous month. Co-star Jocelyn Lane, who eventually married intoish royalty, is one of Elvis fan's favourites. In 1964, four years on from GI Blues, Elvis was fed-up with his lacklustre films and recent recordings and wanted more.

In April 1964 he had met Larry Geller who inspired Elvis to begin on his own spiritual quest. Colonel Parker had not taken kindly to his cash-cow looking outside his usual closed boundaries and, by August, he and Elvis had a heated argument over his new spiritual interests. What happens in my life is my private business.

It is none of the Colonel's affair. Suspecting Joe Esposito of spying on him for The Colonel, Elvis sacked him as his foreman replacing him with Marty Lacker. , Colonel Parker suggested to Elvis by letter that they use previous released album tracks that have never been issued on singles. This interesting letter, written by The Colonel who was suffering from a bad back in hospital, is featured in the booklet, part of which is below. I will not go into a lengthy explanation of what I had to do to explain the idea of using in this picture 10 or 12 songs that you have already recorded..

" "As far as fitting them into the script you would be better off to let the studio fit them where they want them, than for you to take the responsibility of fitting them... " "Forget about a title song, because its not necessary to have a title song in a picture. This is all Im going to suggest because you know more about picking tunes than I do, but I know what I can sell best commercially... In the strained circumstances at the time communications between Elvis & The Colonel were minimal and while Elvis ok'd the idea, the movie company chose the songs. Musically in 1964 Elvis was also on a low.

His last creative hit had been'Devil In Disguise' over a year earlier and The Beatles were driving the new pop scene. In a typical move that would only decrease the quality of the'Tickle Me' soundtrack, but increase his own earnings, The Colonel would only allow songs by Elvis' own publishers to be used in the soundtrack. The FTD sleeve and booklet contains a mix of photos & memorabilia but no rare film outtake photos this time, nor disappointingly any close ups of sensational co-star Jocelyn Lane. I also spotted a couple of errors on the cover. The sleeve wrongly shows'Doc Pomus/Mort Shuman' as the composers of I Feel That I've Known You Forever, while the CD incorrectly states Night Rider was written by'Doc Pomus/Alan Jeffreys'.

The short & sweet master of'Dirty, Dirty Feeling' is indicated as running 03:35 which is also wrong as it runs just 1½ minutes and isnt a special extended version. Original releases'Easy Question/It Feels So Right' was the first promotional single and makes #11 in the US charts. This single was not released in England which seems strange as Crying in The Chapel had just made #1 there. P only made number 70 in the US charts.

The 2002 Castle/BMG vinyl LP featured 18 of these songs plus 2 film trailers and this CD includes exactly the same tracks plus 5'bonus' songs. The only collectible rarity here is'I'm Yours' (undubbed single Master) which has never been released before in stereo and it is interesting to compare the two versions. The LP Master has Elvis vocal double-tracked along with the spoken monologue which is a very different feel to the sparse single version which RCA released by mistake. There are six'Pot Luck' masters featured here and if you collect Elvis FTD releases than you should already own all the tracks and the 7 alternate takes.

However if you like Elvis' smoother early sixties pop style, then this is a very enjoyable compilation and the audio quality is excellent with tracks taken from the best sources available. We do get the recent Elvis Is Back remastered versions. It seems that new generation tape masters have been found for both the Something For Everybody and Pot Luck sessions which bodes well for their FTD Classic Albums future releases. However there is a strange digital noise on the right hand channel on the fade out of Just For Old Times Sake that is not on my original copy of Pot Luck. Slowly But Surely master is the fabulous version in sparkling quality from the Fun In Acapulco FTD.

Long Lonely Highway & Slowly But Surely outtakes were previously on the Long Lonely Highway FTD but both have slightly longer intros with more studio chatter on them here. I Feel That Ive Know You Forever however is missing the "Here we go" intro from LLH. Long Lonely Highway (LP Master) always seemed a little slow on the 60s box set and the speed has been corrected here.

This is a great version, with a fabulous new sparkling audio remaster and also with a wide stereo mix. Put The Blame On Me Tk1&2. Also has more studio chatter than on its previous release on Fame & Fortune. With his voice cracking at the end of a hard nights recording Elvis now says. Not so long since Ive had it, lets face it.

OK, lets try one more. With no new songs featured here there is little to explore and so it is slightly disappointing compared to the other FTD Soundtrack releases. Whether you want the compilation will just depend on your personal taste & whether you own the songs already. Unfortunately there is also very little in the way of rare film photos in the booklet, although The Colonel's letter is truly fascinating.

Tickle Me however is a favourite film of a surprising number of Elvis fans and if you dont own the previous released RCA/Castle LP then this does make a nice collectable souvenir. The item "DELETED and NEAR MINT Elvis Presley FTD CD TICKLE ME 2005 release" is in sale since Saturday, December 22, 2018. This item is in the category "Music\Records". The seller is "kingcreolerecords" and is located in Milwaukee, Wisconsin.